A Large Delivery Expected at Georgia Aquarium This Fall

In the coming months, a new addition will arrive at Georgia Aquarium. One of the Aquarium’s beluga whales, Qinu (KEY-new), is expecting. This is her first pregnancy and her calf is due in the late fall. Although the calf’s gender will not be known until after birth, beluga whales have hefty offspring weighing anywhere from 110-175 pounds at the time of birth and their gestation period is 14-15 months. Animal care teams noticed Qinu and Aurek (Oar-RICK), one of the Aquarium’s male beluga whales, spending more time together, leading to suspicions of her pregnancy.

“We began to notice Aurek and Qinu swimming alongside each other more, changing their body posture, and communicating differently towards each other,” said Dennis Christen, senior director of animal training for mammals and birds at Georgia Aquarium. “This natural behavior, or courtship, is a sign that they are not only getting along, but may mate in the future.”

The veterinary and animal care teams work together on a daily basis to not only ensure the very best care, but to monitor the health of animals as they grow during every phase of life. They were able to confirm Qinu’s pregnancy with a routine ultrasound. Ultrasounds are not only used for pregnancies, but to also monitor internal organs and other elements in many of the animals at the Aquarium. Her care teams are monitoring the calf’s growth through ultrasound imagery.

“Some of the most exciting moments are being able to see the calf on ultrasound,” said Dr. Tonya Clauss, senior director of animal health at Georgia Aquarium. “We have seen the calf grow, heard its first heartbeat, and can now make out its mouth, eyes, and head clearly.”

Over the next several months, Qinu will receive the same expert care – with a few adjustments. She will continue to receive routine ultrasounds, veterinary exams, and more helpings of her favorite fish as her appetite grows. Qinu is also part of an important research study that will compare data from beluga whales in human care to those in the wild and help scientists better understand this species during pregnancy.

“My team and I are excited for the months to come. We’re hopeful that she will deliver a healthy calf,” Dennis Christen continued. “This beluga whale calf will also greatly contribute to future generations’ ability to see these magnificent Arctic animals – many for the first and maybe only time in their life.” 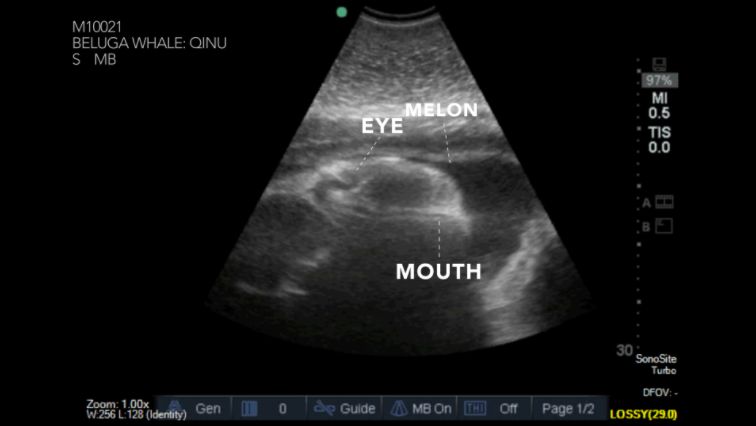 An ultrasound image of Qinu’s calf.

As Qinu and her animal care teams prepare for the delivery of her calf this fall, stay tuned for updates along the way by following Georgia Aquarium on Facebook, Twitter, and Instagram and by visiting news.georgiaaquarium.org.