A new group of tagged manatees will help scientists better understand how these gentle giants use coastal Georgia waters, especially near Kings Bay submarine base.

In the project led by Sea to Shore Alliance, the Georgia Department of Natural Resources, and Georgia Aquarium, eight manatees were recently caught, fitted with GPS transmitters, and returned to Cumberland Sound. Two of the 13 manatees tracked the past two summers are also still transmitting.

The goal is to map this protected species’ movements near Naval Submarine Base Kings Bay, document migratory paths and habitat use in the region, and collect baseline data to help assess manatee health. Biologists are confirming things they long suspected: the importance of the Intracoastal Waterway, or ICW – a narrow passage of natural and dredged rivers between the mainland and barrier islands – for manatees moving along the Georgia coast. The GPS data also shows that manatees regularly venture into the submarine base, they’re able to find artificial freshwater sources to drink from, and a few have traveled into the open Atlantic.

“The Intracoastal Waterway is like a manatee highway,” DNR wildlife biologist Clay George said. “But the ICW is also a primary passageway for boats moving up and down the coast, so this behavior may place manatees at added risk of boat strikes.”

Understanding habitat use and migration details can benefit manatee conservation efforts, according to Monica Ross of Sea to Shore Alliance.

“We know manatees need warm water to survive,” said Ross, a research scientist with the non-profit focused on conserving coastal environments and species. “Unfortunately, several manatees are rescued or die from cold stress outside of Florida each year. Through this study, we are gaining a better insight into when manatees make their migration south.”

Manatees migrate from Florida to Georgia in spring. They occur in tidal waters throughout coastal Georgia from at least April through October. Yet shorter winters and warming waters have widened that window. Manatees were reported at Kings Bay this February.

Most of the tracked manatees have returned to Florida in late summer, long before water temperatures begin to decline, Ross said. “Yet a few individuals wait until a trigger temperature to make the migration, stopping off at manmade warm-water sites that are not always in operation. This is when a late migration can be critically detrimental.”

Weighing more than a half-ton, these slow-moving animals swim just below the surface, often putting them in harm’s way of boats. Since 2000, boat collisions have caused 27 percent of manatee mortalities documented in Georgia.

Staff from wildlife agencies and organizations in Georgia and Florida handled the eight manatees in Cumberland Sound May 31 through June 2. With a DNR helicopter spotting the animals, a custom manatee capture boat from Clearwater Marine Aquarium was used to encircle them with a net. They were then pulled onto the boat or a bank to tag and examine. Biologists and veterinary staff, led by veterinarians from Georgia Aquarium and the University of Florida, examined the six male and two female manatees, took samples, fitted each animal with a transmitter and released all unharmed.

Ross monitors the manatees daily online, and along with DNR staff, regularly checks them on the water. “At least every two weeks, we’ll physically locate each animal, to see what they are doing, check the equipment and take the opportunity to photo ID other animals they might be with,” Ross said. “If at any point the tag activity is abnormal, we will get eyes on the animals immediately.

“This year we are exceptionally excited to have two females to monitor, the first two for this study. Females use habitat differently than males, so it will be exciting to gather their movement data.”

Each transmitter, tethered to a belt that fits around the small area of the body near the tail, floats at the surface behind the manatee. The device does not impede movement or pose a risk of entanglement and is designed to part easily.

Georgia Aquarium is directing the health assessment studies, which are patterned after the Aquarium’s long-standing bottlenose dolphin Health and Environmental Risk Assessment research in Florida’s Indian River Lagoon. “We are continuing to generate important health data from manatees in Georgia that help us better understand these unique animals,” said Dr. Gregory Bossart, senior vice president and chief veterinary officer at Georgia Aquarium. “This information tells us not only about manatee health but also provides important new clues about the health of the environment and potentially the impacts on overall human health.” 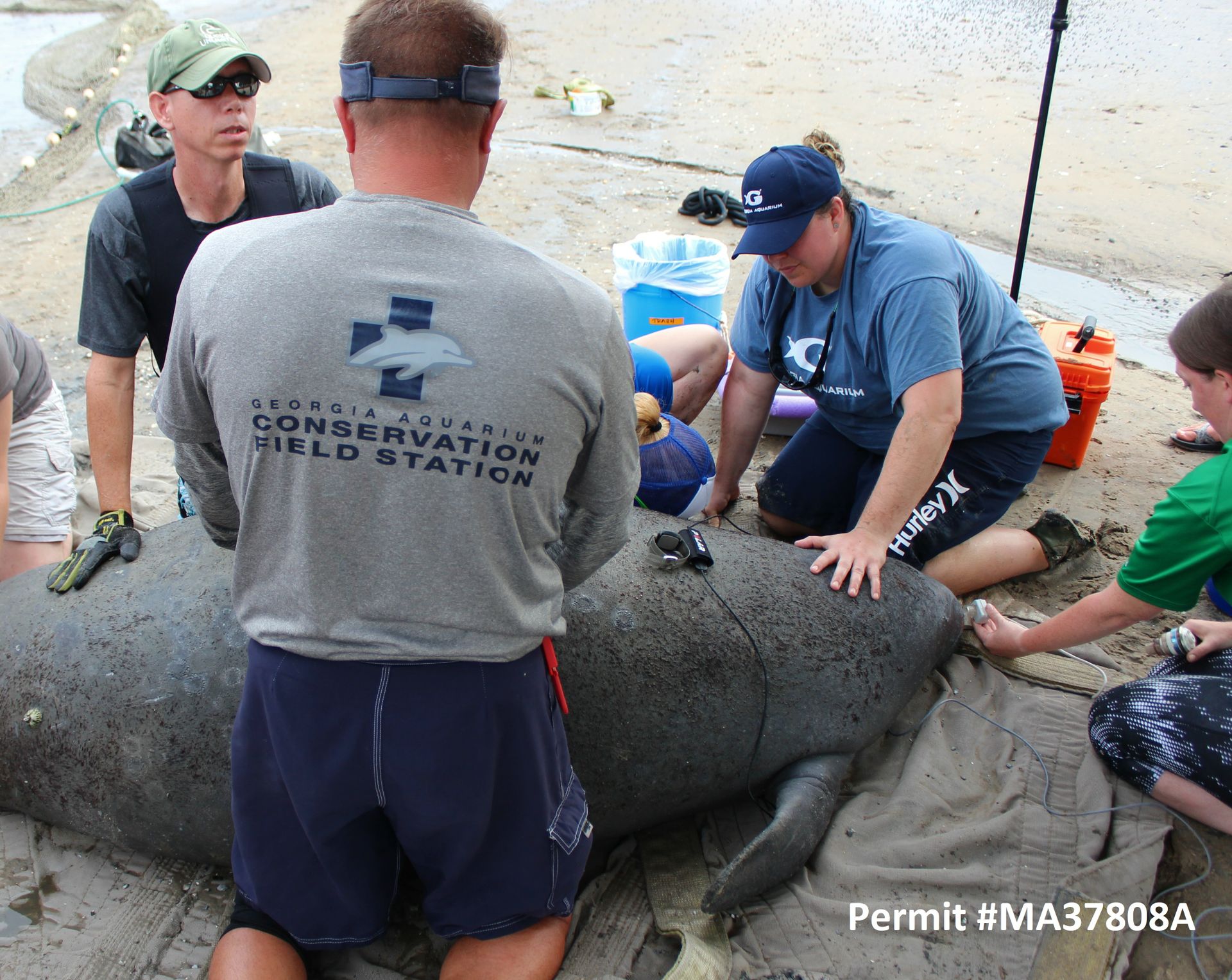 Aquarium staff from the animal health and conservation departments, including Georgia Aquarium’s Conservation Field Station in Florida, took part in the handlings and assessments.

As of June 8, seven of the manatees were still within 10 miles near Cumberland Island and Florida’s Amelia Island. One had ventured north to the Brunswick area.

IF YOU SEE A TAGGED MANATEE
Report the manatee to Georgia DNR by calling 1-800-2-SAVE-ME (800-272-8363). Note the time, date, location, color of the tag and whether any other manatees are present. Do not chase, touch or otherwise harass the manatee, or touch the tag. The tag is harmless to the animal.