My son, Owen, is fascinated by sharks. It’s been a seven-year passion now, resulting in an ever increasing wardrobe of shark related clothing, a library of shark books, and a range of shark toys and games in his room. Our first hint of his interest in sharks came the summer he was 2.5 years old, and we were planning a trip to my home state of Minnesota to visit my family. “What do you want to do when we’re in Minnesota?” we asked him. “I want to see sharks with Grandpa,” he replied. My dad reassured me that there were a few sharks at the Minnesota Zoo, so we planned a visit, and it was the highlight for Owen.
Since we live in California, we decided to take him to the Monterey Bay Aquarium. I watched in amazement as he stood still in front of the kelp forest exhibit and watched the leopard sharks. The sevengill sharks elicited even more excitement and awe, but the hammerheads in the Open Sea habitat had him completely entranced. From that visit onward, sharks were the number one obsession for Owen. We got a membership to the Monterey Bay Aquarium and regularly made the drive to say hi to all of Owen’s shark friends. We soon learned exactly which exhibits had sharks, and every visit involved walking through to see each shark.

At home, we watched videos about sharks, read every book we could find about sharks, and every day he had to wear at least one item from his shark clothing collection. For Christmas the year he turned four, we gave him a red bowtie with a white shark print. The red shark bowtie quickly became his daily accessory, and he wore it everywhere, usually paired with a shark t-shirt. It has even made an appearance in every school photo since that first year. From preschool on, his teachers have often commented on his endless stream of shark facts and love of all things shark related.

We discovered the TV show “Ocean Mysteries with Jeff Corwin,” and it soon became a weekly ritual to watch the latest episode for a glimpse of one of Georgia Aquarium’s whale sharks and multiple shark species.  Owen decided we had to go to Georgia Aquarium to see one of these giant sharks in person. By second grade, whale sharks had made it to the top of his favorite sharks list, along with white sharks and hammerheads. There are very few books about whale sharks at the library, and we rarely find any clothing with whale sharks. This only seemed to spur him on to keep hunting, and he soon was quick to point out even the smallest mention of a whale shark.

We developed a tradition several years ago of celebrating Shark Week, which then led to the discovery of International Whale Shark Day on August 30. Early on, Owen thought that International Whale Shark Day should include a party with cupcakes and presents, but I managed to convince him that instead of receiving presents, we should find a way to do something to take care of the ocean instead. One year we picked up trash on the way to and from school, and another year we had friends over after school to have cupcakes (of course) and to tell them about protecting sharks. 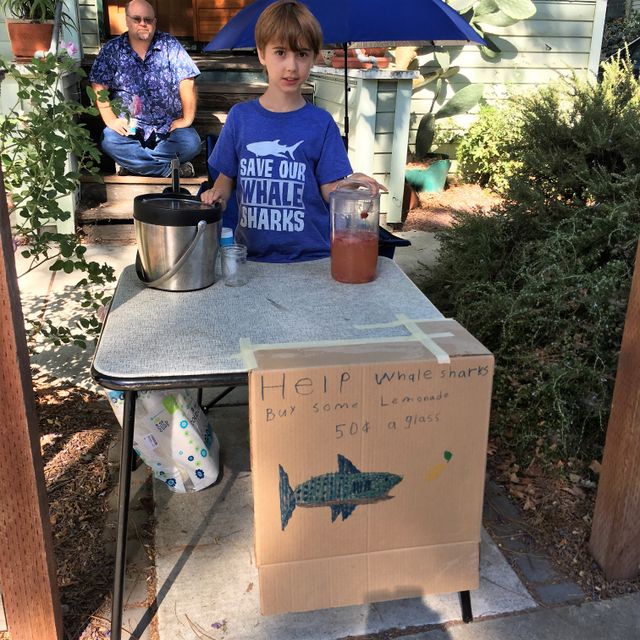 We’ve always tried to encourage Owen to give financially. He has a bank with three sections: saving, spending, and giving. When he receives any money, he splits it up between the three sections. The savings money is deposited into his savings account for his college fund, the spending money he can do with as he wishes, and then he chooses where he wants to give his money, and we help him make his donation. In the past, he’s given to projects at church, to non-profits helping the homeless in our area, and more.

When he was in second grade, his teacher organized a class fundraiser to give money to an organization building wells in Africa without access to fresh water. Owen had the idea to set up a lemonade stand with one of his classmates to try and raise some more money for the project, since we have a lemon tree in our backyard and he’d recently learned how to make fresh lemonade.

After that, Owen began asking to set up a lemonade stand about once a month. After a few months, I asked Owen where he wanted to donate his money this time. He said he wanted it to go to help whale sharks, and could we find an organization that was doing things related to whale shark conservation and send them his money. He had written an essay at school about whale sharks, and was concerned that most people didn’t know anything about them. Owen set himself the goal of raising at least $25 to donate. We did a search online, but we weren’t finding any leads on where to donate his lemonade stand money.  My husband reminded me that Georgia Aquarium has whale sharks, and I remembered that we’d often visited their website for information about whale shark conservation efforts, so I reached out to them for help in getting Owen’s donation directed to the right place.

When the folks at Georgia Aquarium said they wanted to help Owen raise even more money for whale shark conservation efforts, we were all amazed and excited. Owen instantly decided he had to raise more money, and asked me to start posting in our neighborhood newsgroups when he was selling lemonade to try and get more people to come by. He took jobs pet sitting or watering neighbor’s plants while they were on vacation and added that money to his donation pile, rather than spending it like he’s done in the past. Owen is now hoping to raise at least $100 by International Whale Shark Day on August 30, and he’s already more than half way there. Despite being a shy kid, he’s been talking to neighbors about whale sharks, and extolling their amazing qualities, and the need to protect them.  He’s started calling himself an ambassador for whale sharks, and hopes more people will see his example and be encouraged to take steps to care for them.